Hence we created the Explainability Office, a unique set of tools that allow users to evaluate model quality at every stage, identify the logic behind the model analysis, and therefore also understand why certain predictions have been made.

Interpretation
To comprehend the decision-making process and identify internal patterns, we simulate the output of the model across the entire variety of input variables, and present the result in the form of comprehensible slices of multidimensional space. At the same time, we rank these slices by influence for each specific prediction.
Model Interpreter
The Model Interpreter is a tool that allows you to visually see the logic, direction and the effects of changes in individual variables in the model. It also shows the importance of these variables in relation to the target variable.
Read more
Feature Importance Matrix (FIM)
After the model has been trained, the platform displays a chart with the 10 features that had the most significant impact on the model prediction power. You can also select any other features to see their importance. FIM also has 2 modes, displaying either only the original features or the features after feature engineering. For classification tasks you can see the feature importance for every class.
Quality
Evaluate model quality at every stage:
Model Lifecycle: data
Exploratory Data Analysis (EDA)
Exploratory Data Analysis (EDA) is a tool that automates graphical data analysis and highlights the most important statistics in the context of a single variable, overall data, interconnections, and in relation to the target variable in a training dataset. Given the potentially wide feature space, up to 20 of the most important features with the highest statistical significance are selected for EDA based on machine learning modeling.
Read more
Model Lifecycle: Training
Model Quality Diagram
Model Quality Diagram simplifies the process of evaluating the quality of the model, and also allows users to look at the model from the perspective of various metrics simultaneously in a single graphical view. We offer an extensive list of metrics describing the quality popular in the data science community.
Model Lifecycle: Prediction
Besides well-known indicators for evaluation of model quality (e.g. probability and credibility interval), we also calculate a set of additional indicators (row-level explainability):
Confidence Interval
The Confidence Interval, for regression problems, shows in what range the predicted value can change and with what probability.
Model-to-Data Relevance Indicator
Model-to-data Relevance Indicator calculates the statistical differences between the data uploaded for predictions and the data used for model training. Significant differences in the data may indicate metric decay (model prediction quality degradation).
Model Lifecycle: APPLICATION
Historical Model-to-Data Relevance Indicator
Historical Model-to-data Relevance is an excellent signal for models to retrain. This indicator is designed even for downloadable models, which allows to manage a model lifecycle even outside the platform.
COMING SOON
Validate Model on New Data
Validate Model on New Data shows model metrics on new data to help determine whether the model should be retrained to reflect the statistical changes and dependencies in new data. It also shows metrics in multidimensional space (Model Quality Diagram).
Close
EDA
Dataset overview Continuous data distribution Discrete data distribution Feature correlations Target variable distribution Outliers Visualization Time Dependencies Missing Values Visualization
In the «Exploratory Data Analysis» tool you can find the specified information on graphics in each of the following sections:
Dataset overview
This section displays brief data statistics of your training dataset and provides the following information: problem type, dataset dimension and number of missing values recorded. 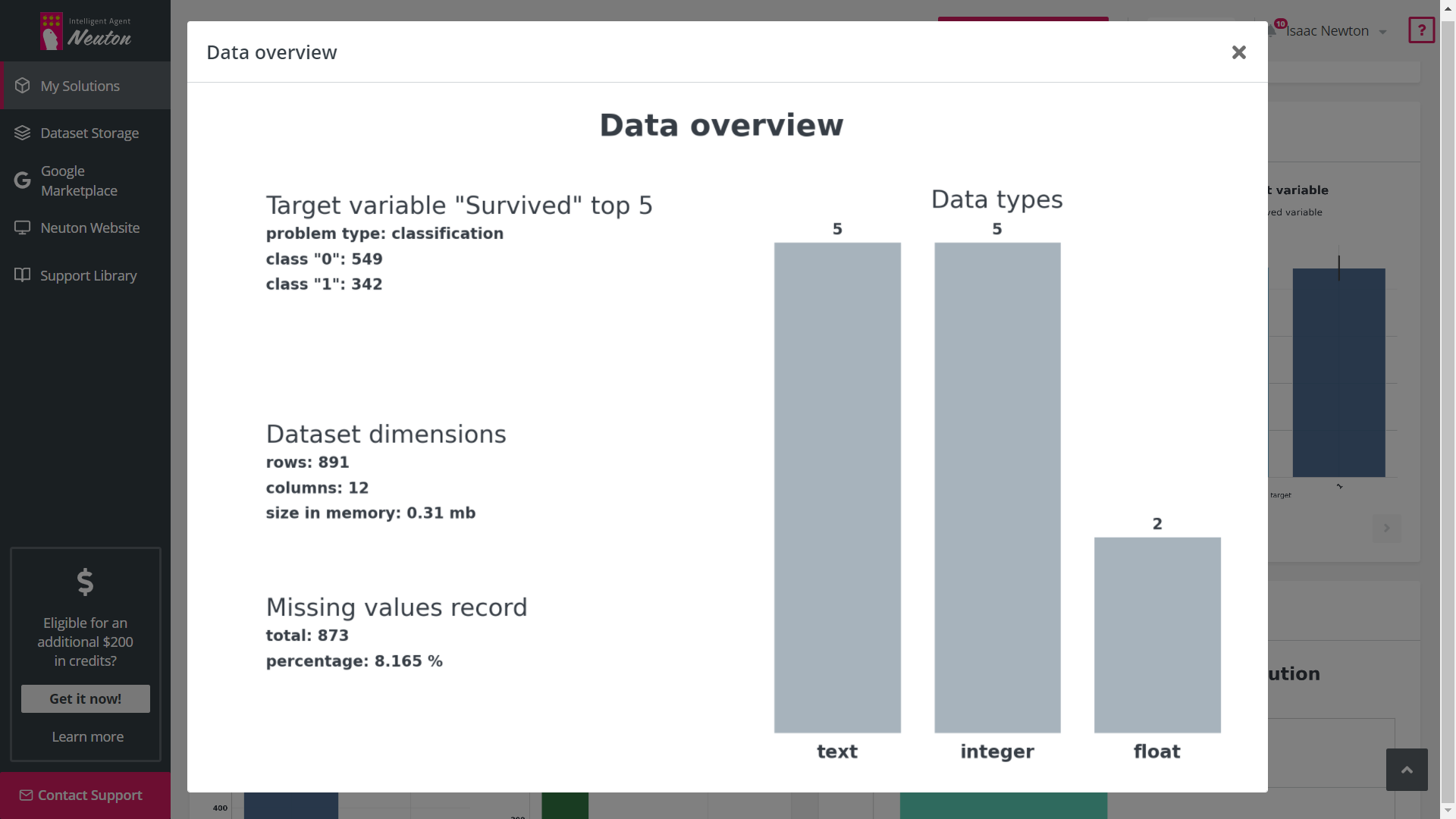 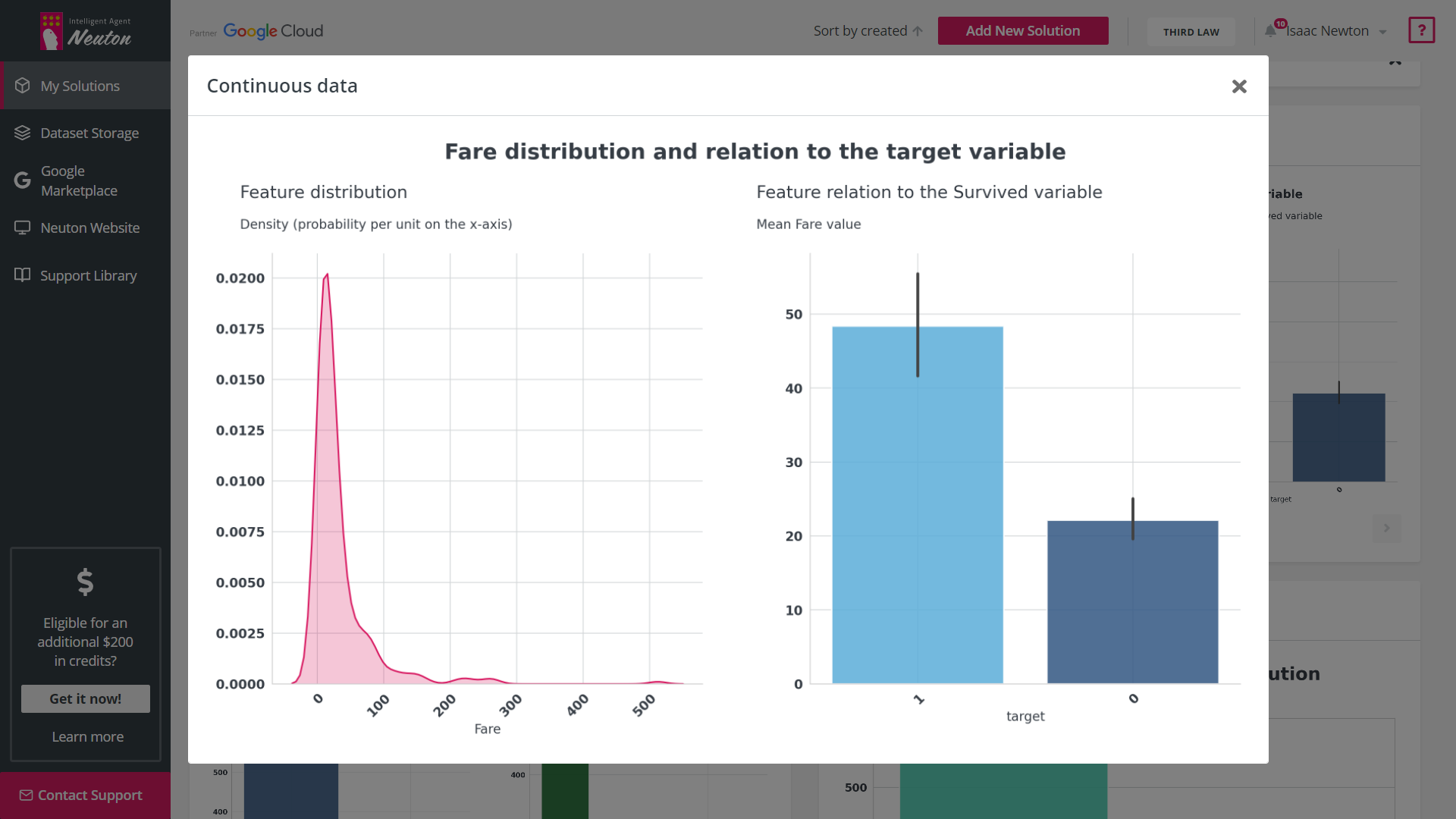 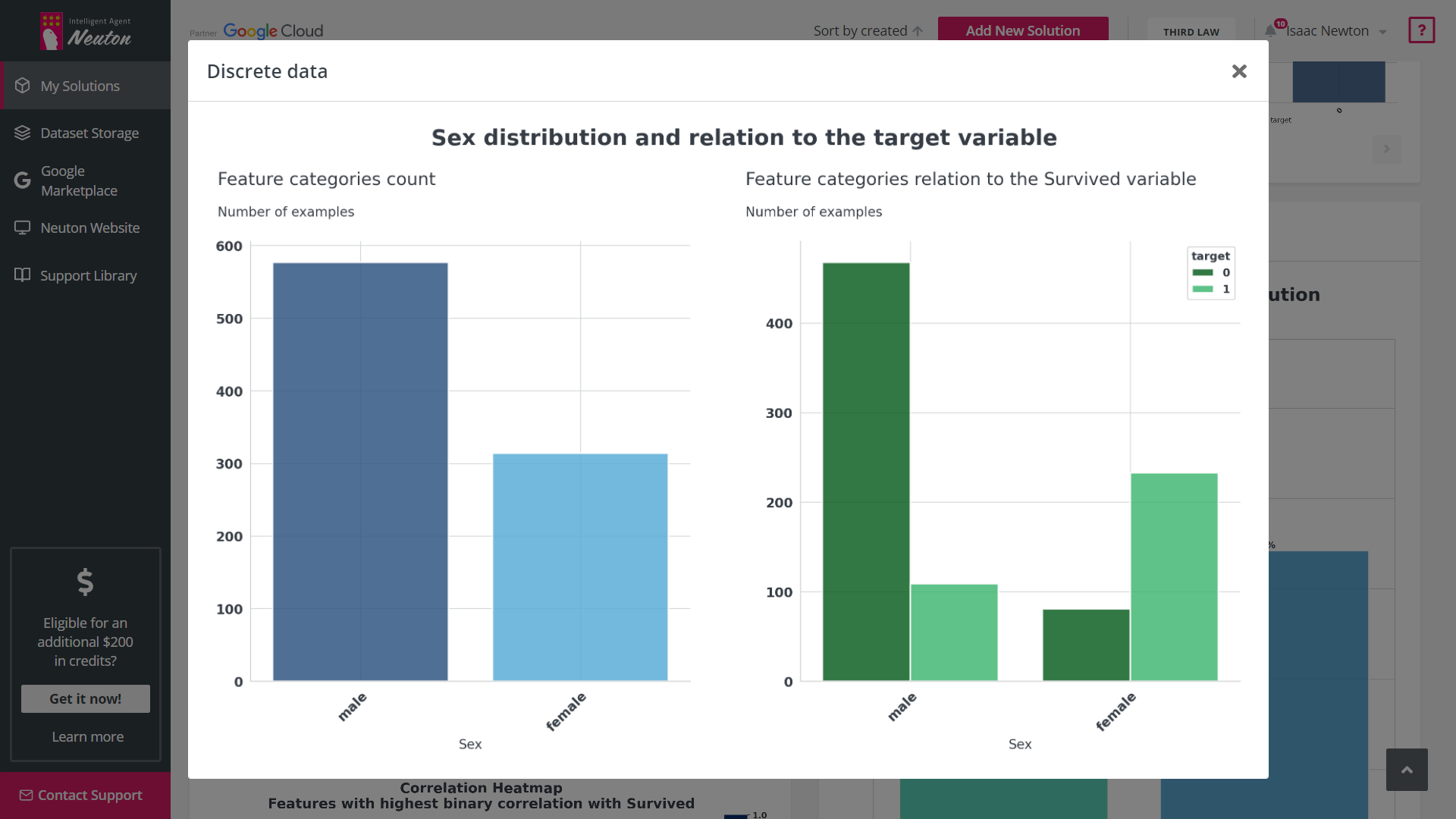 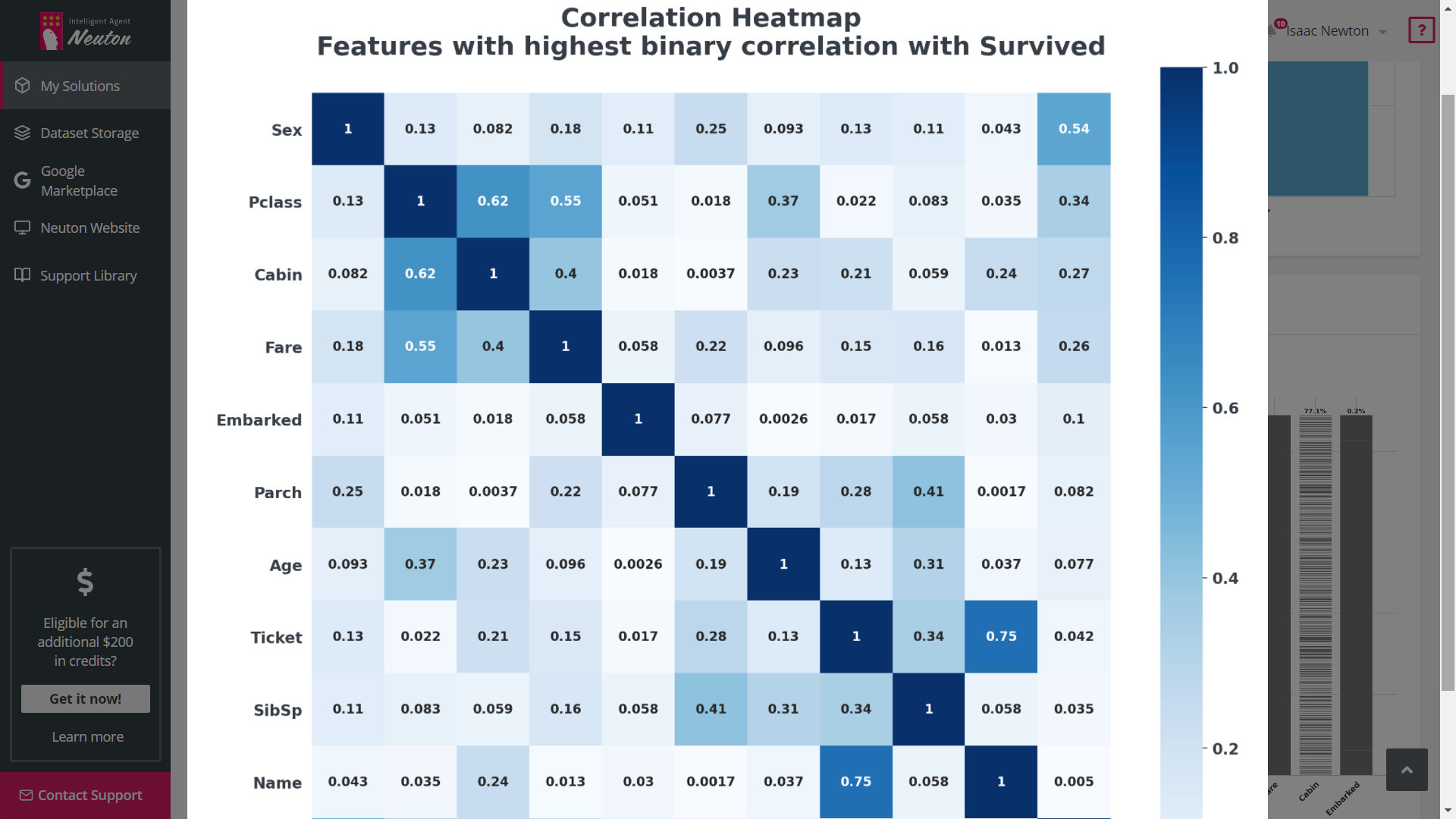 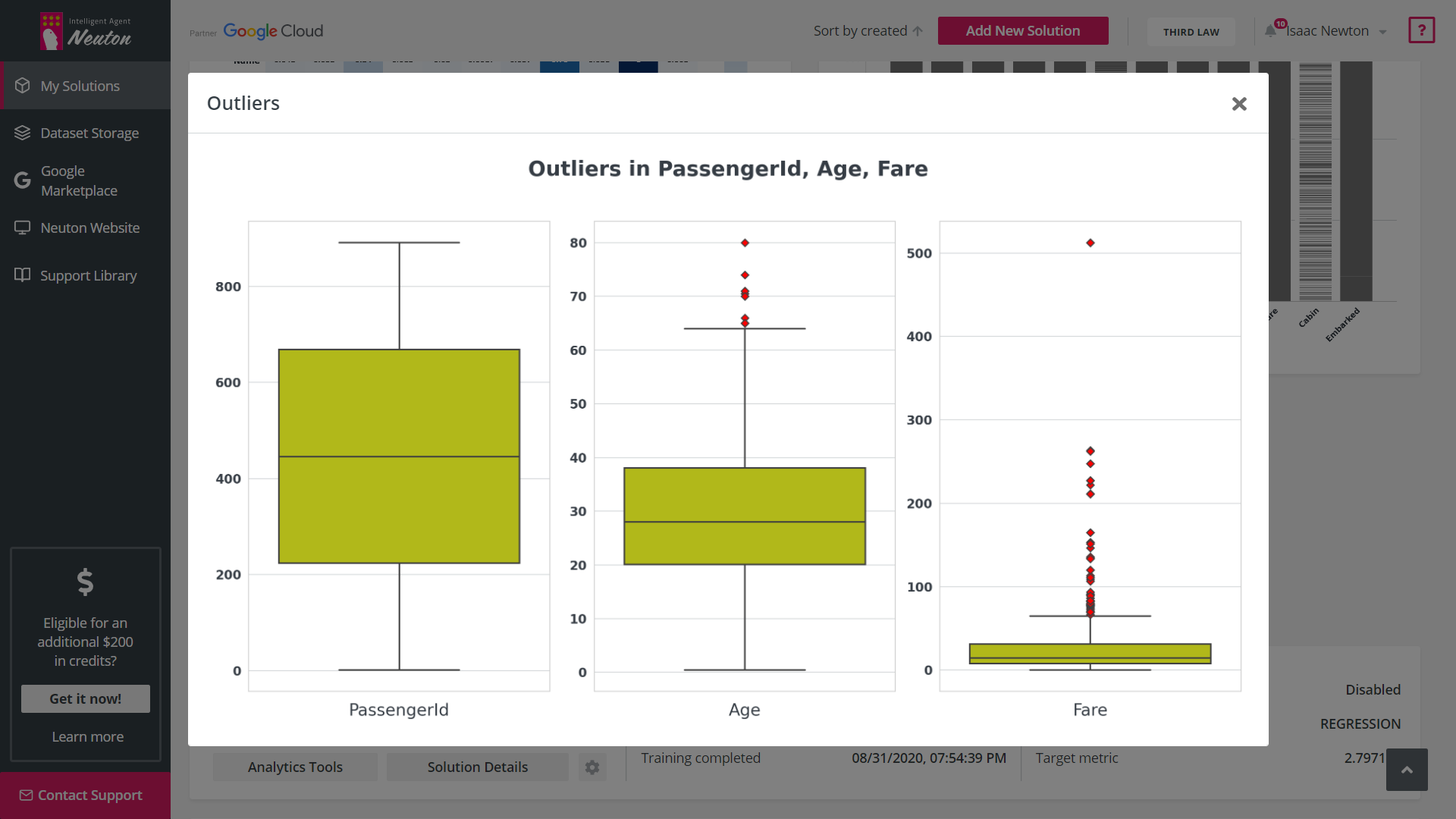 Time Dependencies
A Time dependency plot is created if a date-time type column is presented in the data. Visualization of time dependency yields three plots, each displaying a line chart of the target variable changes over time. The difference between the charts is the level of data aggregation:
Chart 1: No aggregation. Target variable value is plotted against each date point in the data.
Charts 2 and 3 will dynamically aggregate data into years/months/weeks/days/hours/minutes. Aggregation options are automatically selected based on the data timeframe. 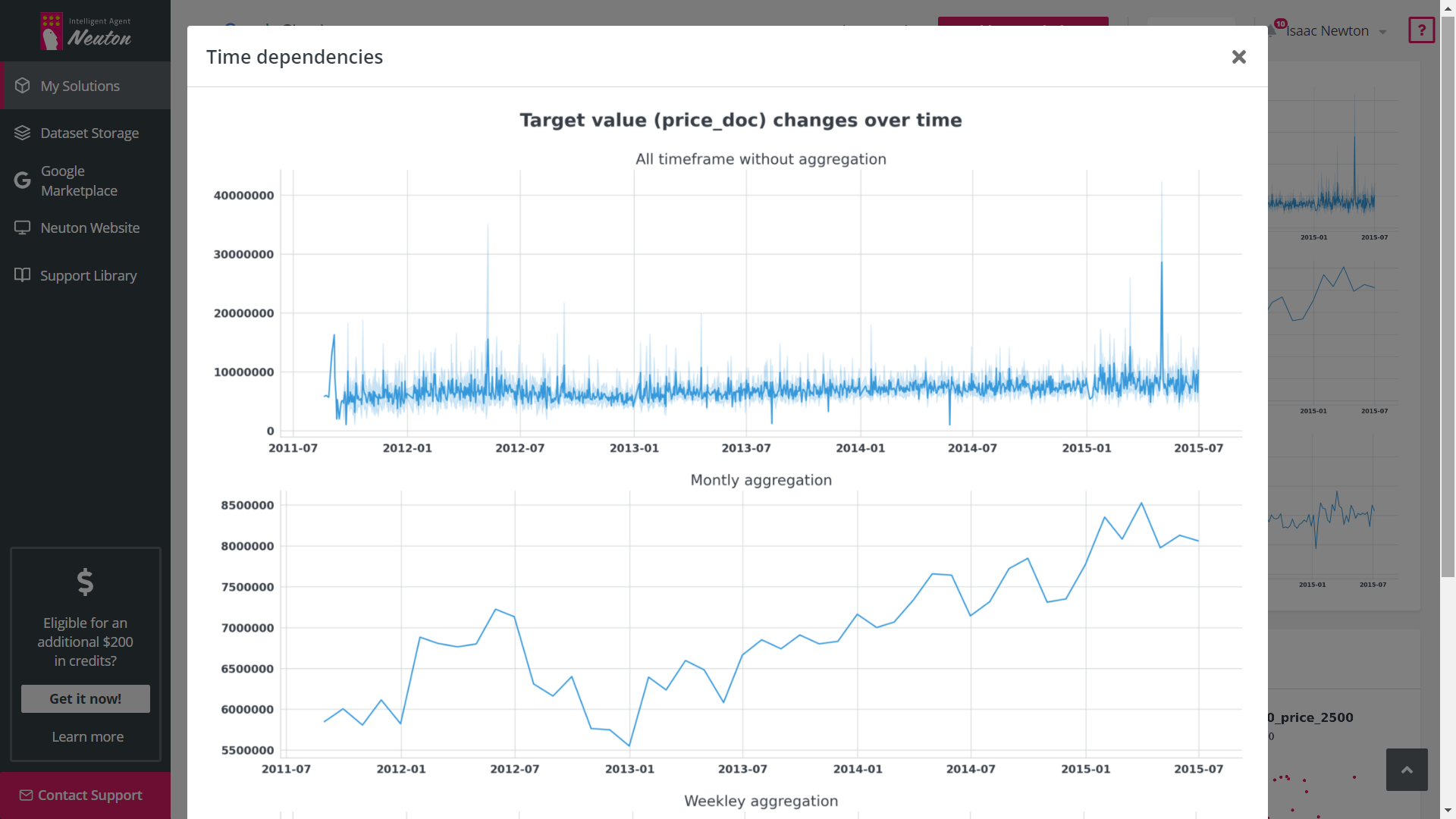 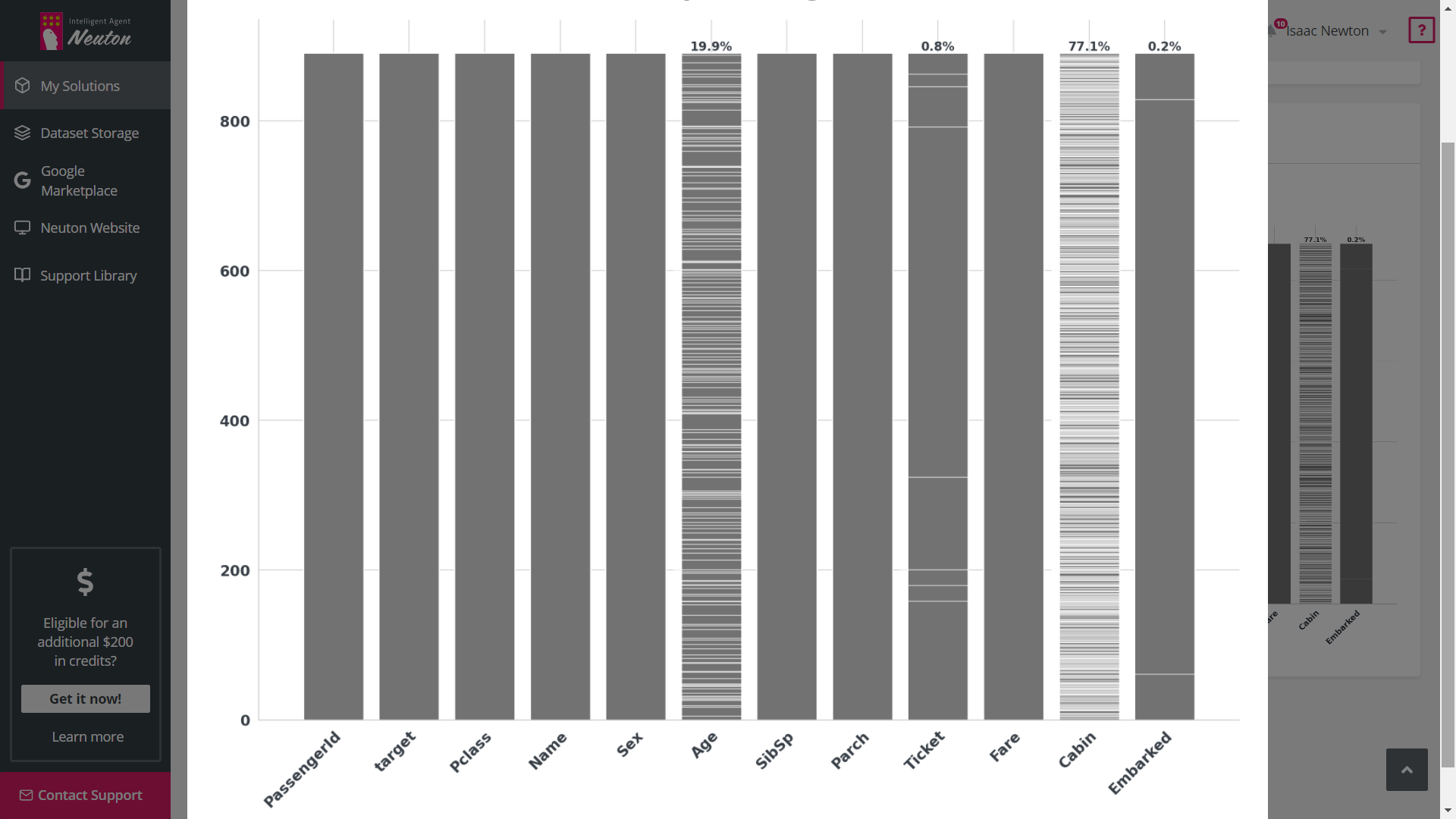 Stay updated, join our community
This website uses cookies to give you the best online experience
Accept